Student Editorial: Belle Roberts The last sight the guests of the 10,000 Buddhas Repentance expected to see while they were eating was a group of girls schoolers wielding paper flowers. Nevertheless, on the Friday before Mother’s Day, students from Instilling Goodness Developing Virtue Girls School charged into the […]

Student Editorial: Belle Roberts Stroll by the IGDVGS booth at the Child Expo and one would see a flurry of girls in uniforms. Some wear green plaid skirts with navy v-neck sweaters. Others have on elaborate Chinese costumes and flowers in their hair. Upon closer inspection, one can […]

Bringing Together the Best of Humanity

Student Reporter: Ellie Ng, Class of 2017 The news of the Valley Fire came as a great shock to many of the students in the school. After discovering the massive destruction it caused, a group of students went to help out at the Clearlake donation center. Disaster brings […]

Student Reporter: Phoebe Soong & Sylvia Yap, Class of 2019 It was on a Friday, the 27th of November, during the Thanksgiving break, when some junior high and freshmen of Developing Virtue Girls School paid a visit to the Food Bank Ukiah. There, they assisted in sorting through […]

Gratitude to Elders of the World

Student Reporter: Phoebe Soong, Class of 2019 On November 27, 2015, the Junior High and Freshmen from Developing Virtue Girls School visited Autumn Leaves, a retirement center, which has served the senior community in Ukiah for over forty years. At the center, students perform and chat with the […] 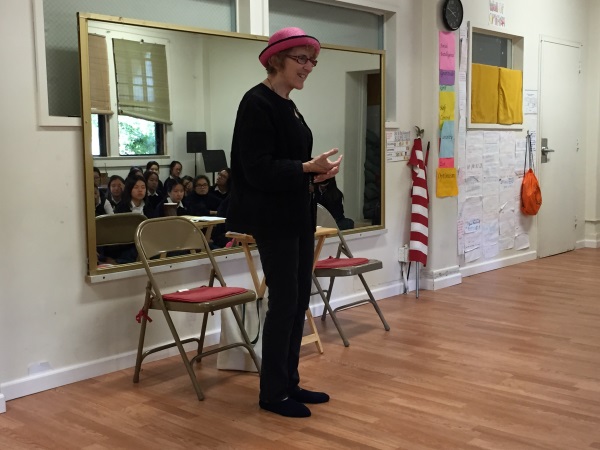 Student Reporter: Oceanna Ackley, Class of 2018 On Wednesday afternoon, October 28th, Developing Virtue Girls School hosted a special guest, the renowned activist, Ms. Carol Ruth Silver, who shared her inspiring story with students. “Embrace what life has to give and take the paths that lead to opportunity” […]

The 2nd and 3rd grade Social Studies class held mayoral elections as the culmination for the government unit. After studying about government at all levels, including a visit to Ukiah’s city hall to hold a mock city council meeting, the students chose a character from a novel they […]