Three large, yellow school buses passed through the gate of the City of Ten Thousand Buddhas and parked in front of the Developing Virtue Girls Secondary School. The silence of the still morning air was broken by the chatter of 200 curious and excited middle school students descending the buses and gathering near the front of the Buddha Hall. Later that morning, a horde of people with colorful clothing and backpacks could be seen walking from the cafeteria to the high school, ready to meet the students from the Developing Virtue Girls School. 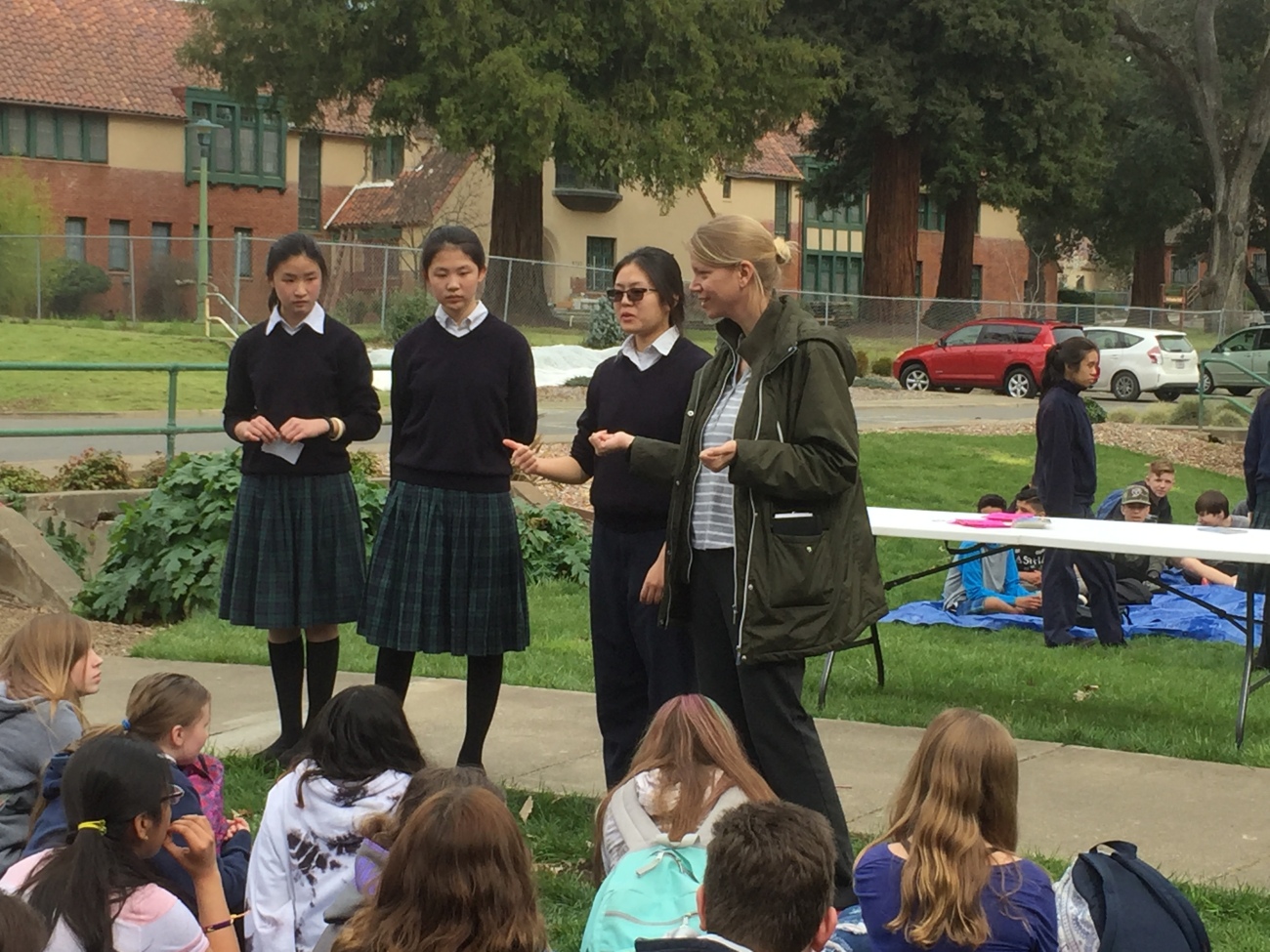 The visiting students arrived around noon time. After having a delicious lunch including sandwiches, tofu, and broccoli, they headed over to the Developing Virtue Girls Secondary School, where they explored four booths prepared by girl schoolers: Buddhism, Meditation, Student Exchange, and Chinese Culture.

At each booth, the Pomolita students familiarized themselves with the culture and environment of DVGS by asking questions; hearing about the school, Buddha Hall, and campus environment; and through doing various activities.

At the Buddhism booth, students listened to the experiences of DVGS students and teachers regarding Buddhism. In addition, they learned about the Buddha Hall and the Patriarch Hall as well as the customs of the monastics.

Meanwhile at the Meditation booth, students were introduced to meditation and its benefits. Gem Hoang, a DVGS student who helped out at the booth, explained, “Meditation is practicing mindfulness and concentration. It increases energy and happiness, helps you balance emotion, and it’s good for your health.” After learning about meditation, the Pomolita students were given the opportunity to meditate for five minutes, practicing good posture and concentration. It was a new experience for many of the students, and many of them said they felt different afterwards.

At the Student Exchange booth, Pomolita students were able to converse with DVGS students, discuss differences between the schools, ask questions about DVGS, and exchange stories about school experiences. Some of the questions asked were what clubs were available, what tofu was, and if there was school seven days a week. According to Sharon Liang, a girl schooler assisting the booth, School Exchange was like a “school bonding,” where they “got to know each other’s school better.”

Other Pomolita students were busy playing with Chinese yoyos (a favorite), practicing calligraphy, and making Chinese Spring (春) papercuts at the Chinese Culture booth. Sophie Xue, who helped at the booth, related that the students were very “curious,” especially about how to write their Chinese names in calligraphy. 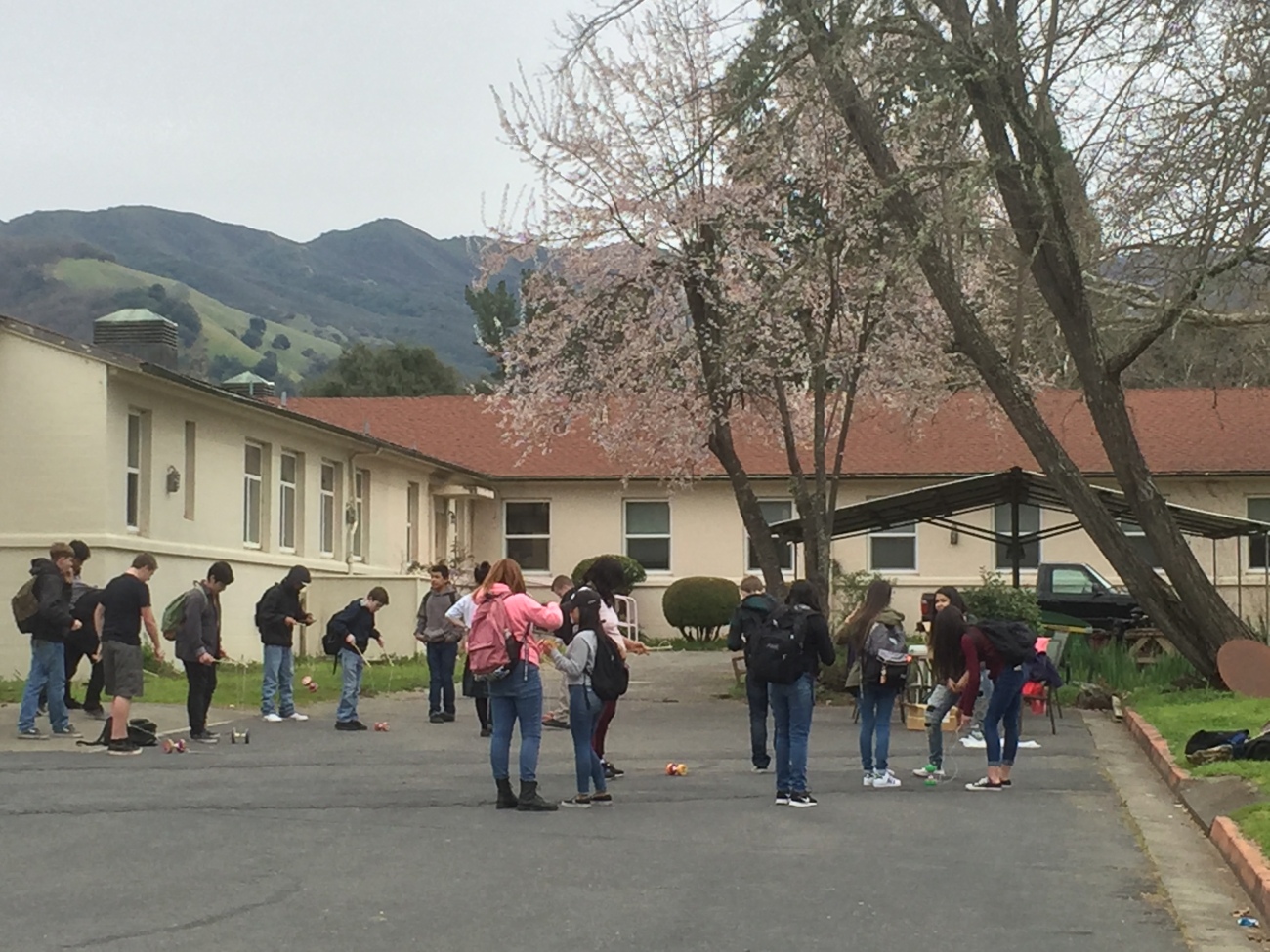 On the whole, the event was eye-opening and intriguing for both the DVGS students and the Pomolita students. There were some thought-provoking and creative questions from the other school, and the girl schoolers successfully engaged the visitors in activities with a collaborative effort. Thank you to the girl schoolers and Pomolita students for making this event possible!